A PDF version of this tutorial is available here.  The files required for this tutorial (including worked files) can be downloaded from here.

In case of issues, please contact This email address is being protected from spambots. You need JavaScript enabled to view it.

(if you just landed here, we recommend you follow the tutorials about Lipid bilayers, Part I and Part II,  and also the Proteins Part I first)

A) Proteins in membrane environment

B1) Protein complexes with independent itps for each monomer.

B2) Protein complexes with merge option

B3) Comparison between models

C) Tools and scripts used in this tutorial

A) Proteins in membrane environment

In this module of this protein tutorial, we will increase the complexity of our system by embedding the protein in a lipid bilayer (please take a look in the lipid tutorials, part I and part II,). We propose here to have a look at the tilt and the dimerization of KALP peptides(1,2) embedded in a POPC membrane. Eukaryotic plasma membranes (PM) are often approximated as a pure POPC bilayer (being the most common PM phospholipid) or a pure DOPC bilayer (were average bilayer properties can be closer to those of a PM, although DOPC itself is not prevalent in eukaryotic cells)(3).

The coarse-grained structure and topology of KALP can be simply generate by using martinize2.

In simulations involving peptides, an important step is to well define the secondary structure. As they can be very flexible, is important to be sure of your assumptions.  For transmembrane (TM) peptides like KALP with 20-30 residues as chain length (23 residues the example used in this tutorial), it is expected that the charged terminals would be more disorders, while the hydrophobic TM section should be helical. For other TM peptides, maybe we useful to add longer terminals and/or cap the terminals, depending of the specific systems being studied. Elastic networks (4) or Gō models (5) are not necessary in this case as the bonded parameters should be enough to keep the structure stable. However, side chain corrections (6) can be important. Given that Martini 3 protein models (7) avoid excessive overmapping (an approximation used in Martini 2 Protein models) (1,8), residues as leucine and lysines use S-beads to represent their side chains. Without steric effects, additional dihedrals maybe necessary to keep the proper orientation of the side chains.

After getting the CG structure and topology of KALP, we can start by solvating the protein directly with the membrane environment so that it ends up inserted. Different ways to perform this step are possible. This tutorial presents two approaches, which are shown in the following sections:

A bilayer self-assembly dynamics, as presented in the first module of the lipid tutorial part I, will result in the self-insertion of the KALP inside the bilayer (Fig. 1). 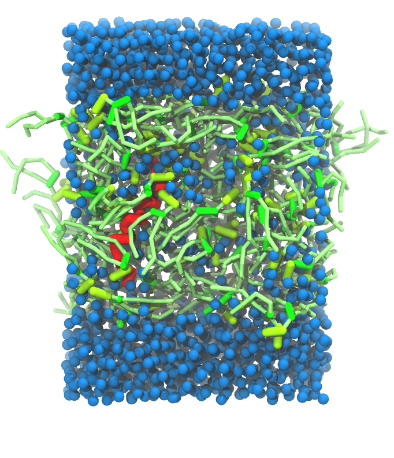 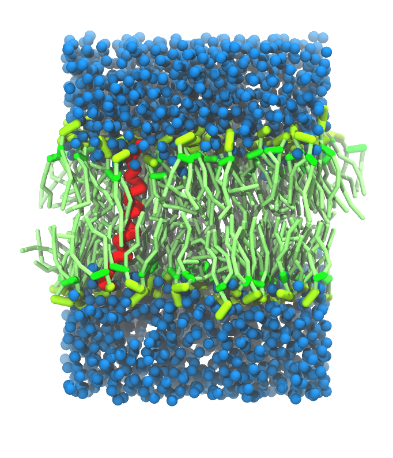 Figure 1 | A) Self-assembly (4 ns) of a lipid bilayer (green) embedding a KALP peptide. B) Initial "soup" of lipid and solvent (water; blue) in which the KALP (red) is mixed. C) Final conformation of the simulation.

You should also replace 4 water beads by CL ions in the top file, as the systems needs to be neutralized. In addition, do not forget to add the missing itp files in top file.

This second method, being the easiest and the most straightforward, is the recommended one to build such systems. Here is the procedure:

The previous command line will set up a complete system, containing a squared POPC bilayer of 7×7 nm2, with the KALP peptide inserted and centered in this bilayer. The whole system will be solvated in standard coarse-grained water. A small concentration of NaCl was added only to neuralize the +4 charge of KALP. More on the insane.py tool can be found in separate tutorials, notably setting up a complex bilayer (lipid tutorial part II).

The aim of this second module is to see how application of elastic networks can be combined with the Martini model to conserve quaternary structures more faithfully without sacrificing realistic dynamics of a protein. As example, we will use HIV-1 protease, which is an essential enzyme for viral particle maturation and is a target in the fight against HIV-1 infection worldwide (10–12). You should be aware that the HIV-1 protease structure used in this tutorial (pdb code 1A8G) includes a ligand. For now, this ligand is not known as a building block to martinize2 and need to be removed from the pdb, which can be done using the command:

If you want to study this or other ligand binding, you will need to build a Martini topology for the ligand yourself and then add to your simulation box, together with your protein CG model. We suggest you to take a look in tutorials “Parametrizing a new small molecule” and “Protein - small molecule binding” in case you want to go in this direction.

Another point to be aware is that the protein is a dimer. By default, you will get a topology file with the two subunits being treated as individual molecules in martinize2. Overall, Martini 3 can deal well which such structures, however you may have potential packing problems, which can make Martini 3 models to form complexes not so stable. These problems are usually related with backbone (BB) bead interactions between different proteins in the complex. As the bead size for the BB beads is actually too big to well represent the BB-BB distances, you can create a packing problem that pushes the proteins apart, reducing their interactions. In these cases, you may need to consider using Elastic networks (4) or Gō models (5) between the chains. But first, let’s evaluate if this is the case in the HIV-1 protease dimer.

B1) Protein complexes with independent itps for each monomer.

- build a simulation box with your protein in water solution with 0.15 M of NaCL, using insane code:

- Update the system.top file of your system and then run a minimization, equilibration and production simulations. Given the size of the system, you may need to use less CPU/threads in the MD steps.

Figure 2 | Elastic network (gray) applied on both monomers of the HIV-1 protease (yellow and orange, respectively)

B2) Protein complexes with merge option

In case you gave doubts that the dynamics of your protein complex is not good enough, an option to help to preserve higher-order structure of complex is to add an elastic network between the chains.

It is worth mention that martinize2 allows you to easily manipulate the elastic network. In addition to the options related to cutoff and force constant, you can also change some other definition of the elastic model. For instance, the extra elastic bonds do not need to be used only in BB beads. Other beads of your system can be used defining them in the flag -eb RB_SELECTION. This feature will be useful in the future to generate stiff Martini 2 models of DNA (13) and RNA (14). Another important option is to redefine which part of your system will get elastic network or not. This can be done with the flag –eunit.

B3) Comparison between models

With two simulations of the same protein complex using different approaches for elastic network, you can now compare the trajectories with different Martini protein models. If you do not want to wait, some pre-run trajectories can be found here. As in Protein tutorials part I RMSD and RMSF can be calculated using GROMACs tools (gmx rms and gmx rmsf) (15) while VMD (16) or Pymol can be used to visualize the trajectories.

Based on the results of Figure 3, try now figure out which approach is the best in this case. One aspect to consider is that we used a HIV-1 Protease conformation from a structure with a ligand (holo state) but the simulations was performed without the ligand (apo state).  What the literature indicate about previous NMR, crystallography and MD simulations studies with apo states of this enzyme?

C) Tools and scripts used in this tutorial